How tough is the Foldylock Compact?

Hear what our customers have to say about their Foldylock

The lock is great but did take some rearranging of my other bike components. I have a Trek Marlin 5 with a medium frame and the lock will not fit on the water bottle mounts below the seat.

Couldn’t make a better investment. Foldylock was the best I could find. I feel comfortable away from my bike with foldylock. Approximately $100 for foldylock compared to a $1000 bike, why go cheap, go foldylock! Compact and versatile. ⭐️⭐️⭐️⭐️⭐️
This is not a payed endorsement. From really people like you.

Big respect for the makers. I mean really BIG. In Amsterdam you need a tough lock. Most locks rust or oxidize, are akward to handle (U shape, rattling chain chipping your paint because cloth protection wore off) get cut to easily or have akward key access. Almost all keymechisms fail within 2/3 years if your are lucky, or key's break... Foldy Lock never failed. My bike is parked outside in sun, wind and lots of rain, 365 days a year. Even when it's freezing no problem with the mechanism. (German lockmakers like ABUS don't come even close to this quality and design). And, as icing on the cake: it is also the best looking lock I ever had - inlcusing the indestructable key. Great lockholder too! PS The only thing that ever broke was the rubber band of the lockholder after four years, which was stretched at least two times a day in my case - and I got a free replacement. So FoldyLock know what service is too. Maybe standard deliver an extra one with each lock, to keep with your spare key (so people don't loose 'm in drawer).

Works great, attaches easily to frame in place of bottle cage. And the blue/black color scheme matches my bike! 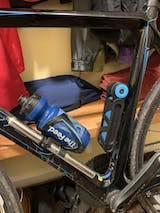 This lock is really cool. As sturdy as U-lock but more flexible and more compact. The bike mount is also cool. No sagging pants with other too heavy locks. Great service I ordered the wrong color initially (my bad) but the friendly people at SeatyLock manage to change it before the dispatch. Tracking was not updated but the lock arrived within the promised time, so all is superb! Thank you!!! 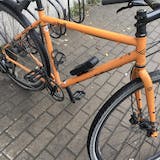 A
A.R.
Easy to use, mount could use a little improvement

Bought to go on a Juiced CCX, which has a fairly large battery. The lock is easy to use and is very secure, with enough length to go around the rear wheel & frame and mount to a post/rack. Not nearly long enough to reach the front wheel, but no folding lock is going to handle that. My only minor gripe (so only four stars) is that the mount to attach it to the bottle bosses has about 3/4" of stand-off from the frame, so the furthermost edge of the lock sits about 2-1/4" from the frame. On my bike, attached to the underside of the top-tube, I had just barely enough room to clear the battery when taking the lock out of the mount.

I had three concerns when shopping for a lock for my new e-bike:
1. Security. This thing is a beast, and I am quite confident leaving my bike unattended.
2. Functionality. Very easy to use, can secure frame or wheel.
3. Aesthetics. It's beautiful, and it doesn't hurt that it matches my ride, yo!

Way more safety than a cable, lighter and easier to deal with than a U-lock. Easy to mount on my bike, easy to use. Hey, and the color..... 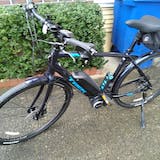 A
A.M.
Failed to capitulate when called upon

I originally purchased a Foldylock Compact in Sep 2019, after my 14-year-old commuting bike was stolen (whilst cable locked) during the afternoon whilst at work. The bike wasn’t worth much financially and I eventually found a similar, second-hand model and decided to invest in this lock.

A few weeks later, I left work to find the lock damaged, but intact, obviously the result of someone trying to leverage it apart. Thankfully, it did its intended job, but it no longer folds together cleanly, in order to fit snugly into the storage bracket.

I have therefore purchased another (blue) one and will just keep the damaged one as a spare, as it does still work.

I like the lock:
• for its level of protection
• for the way it folds away neatly and is of acceptable weight
• because I can usually lock my rear-wheel, the frame and a fixed object.

I know there are more robust locks, but for me personally, it’s a trade-off between the perceived level of risk and carrying a hefty lock everywhere, especially given I’m already carrying enough weight! 😊

Lock is easy to use and solid.