Previous | Next
Home U Locks Mason 220 The mount sits perfectly in my Inokim OX, worth any penny.
The delivery was fast

Where I am theft is a rare assurance, but it better safe than sorry.

I'm very grateful to have received the mounting bracket with the zip-ties. Delivery was quick. Although the bracket arrived with a minor scratch on one side of the base, it can't be seen --especially with the lock in it. It's a quality made product. So far my Seatylock U Lock feels secure without rattling much when riding my e-scooter. Thank you!

The lock is huge and I can lock my bike up anywhere! It's big and a little bulky, but I live in NYC and needed a big lock to feel safe locking my bike up outside. Delivery was great and easy.

Very sturdy solid lock. Weights almost half of all similar size locks. Had my doubts at first as the lock rattled alot while cycling. So I added two 14mm rubber o-rings on each shackle. Fits perfectly now & no rattles while biking.

What I like about this mounting bracket is that the U-lock stores quickly and easily, although I did augment the bracket with a Velcro strap on to hold the lock to the frame on the other end.

I like the Pentagon 300 u-lock that I bought (so far). What I don't like about its mounting bracket is that it uses a strap, which stretches over time and if you cut the strap after installation it is very hard to try and get it tight on the bike frame again. Why Seatylock would use this flawed bracket mounting design is a mystery to me because a conventional bolt-on bracket would be much better (that's what my other u-lock brand uses and it's never come loose.)

Great product & great customer service! My bracket came with a missing piece and they sent me a new one a couple of days later, with no hassle.

See attached image. I love this lock. It gives me a strong sense of security. Thanks. 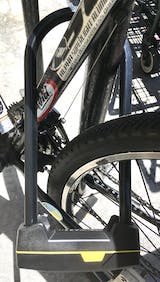 Using this for my Rad Runner! This lock is a beast, seems very well manufactured. Heavy and glad e-bike is carrying the load. Also, seatylock staff was very very helpful, email response took a day or two but that is expected during current crisis. They shipped quickly and want to thank them for their support.